“Drop-dead funny.” — One of several publishers who rejected our first book.

“I laughed so hard I almost fell overboard.” – Jamaica Rose, No Quarter Given 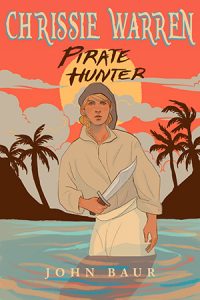 When Chrissie Warren’s sailor father is captured by pirates, the 13-year-old disguises herself as a boy and signs on to a Caribbean-bound merchant ship to find and rescue him. With the help of unexpected friends she survives attacks at sea, back-alley brawls and the press gang, finally tracking the pirates to their lair. What she discovers along the way is – herself.

“If you like pirate yarns, adventure tales, wry humor, or just books, chart a swift course for Chrissie Warren: Pirate Hunter. Talk Like a Pirate Day founder and renowned pirate scribe John Baur’s first stab at young-adult fiction features top-notch characterization, breathtaking battle scenes, and as much plot as your favorite Rafael Sabatini and Hunger Games novels — combined. What’s more, Baur layers in maritime verisimilitude as well as anyone since Patrick O’Brian. You will taste the salt air. You will feel the four-pound cannonballs whistling past. You will not be able to wait to set sail with Chrissie Warren and her crew again.”

— Keith Thomson, NY Times bestselling author of Once a Spy and Pirates of Pensacola

A heart-warmin’ tale about tattooed pirates in the Caribbean who save the day!

Join our own Cap’n Slappy, Tal, Ninja Boy, Pirate Baby Girl and crew in one of the best children’s books ever about a Christmas pirate adventure.

“…a charming children’s pirate picture book that promises to emerge as a Christmas classic … This delightful mix of bold buccaneers and swashbuckling good fun teaches the universal values of honesty, integrity and good form.” – StyleCoven.com

Story by Clay “Talderoy” Clement, piratical rhymes by Cap’n Slappy, art by Jun Alvarado, layout and design by Lycan. Brought to you by Santa Claus and Studio City Tattoo. Order your copy now from PirateSanta.com.

Everyone knows Cap’n Slappy as a legendary pirate, pillaging and plundering and delivering savage beatings with his fists and forehead. But he also has a more artistic side, and – as you know if you follow him on Twitter or Facebook – he’s prone to breaking out in poetry at the drop of a (pirate) hat. Now he’s collected some of his best pirate limericks, “pi-ku” and other poetical ditties in a slim red volume that makes an excellent – and hilarious – stocking stuffer for the pirates in your life.

Order it now from Lulu.com

Ahoy there, scallywags and sea wenches! Prepare to have your timbers thoroughly shivered. The two guys who accidentally invented International Talk Like a Pirate Day, experts in areas of pirate lore, pirate philosophy, and pirate fashion sense, here present a hilarious guidebook guaranteed to have landlubbers swashing their buckles in no time!

“By applying the principles in this book, I’ve enjoyed a 78% increase in my income from plunder.” –-Dave Barry

240-page trade paperback from Citadel Books, a division of Kensington Publishing Co. $12.95 (and worth every penny!).

Order it now from Amazon!

Join Cap’n Slappy and Ol’ Chumbucket in a rollicking lesson in how to bring pirattitude to your everyday life. Whether you’re a scurvy dog or a saucy wench, you can join revelers worldwide in talking, plundering and swashing your buckles like a pirate 365 days a year.

“Every now and then, some visionary individuals come along with a concept that is so original and so revolutionary that your immediate reaction is: ‘Those individuals should be on medication.’

Today I want to tell you about two such people, John Baur and Mark Summers, who have come up with a concept that is going to make you kick yourself for not thinking of it first: Talk Like a Pirate Day. As the name suggests, this is a day on which everybody would talk like a pirate. Is that a great idea, or what? There are so many practical benefits that I can’t even begin to list them all.” — Dave Barry, Miami Herald, Sept. 8, 2002.

More from the Pirate Guys and Lulu.com:

A piratical romp through the alphabet with all that that implies. Sometimes rude, sometimes downright dangerous and subversive, but always fun and always funny. “A Li’l Pirate’s ABSeas” does for the alphabet what a well-placed broadside does for a Spanish galleon – softens it up so that pirates can have their way with it! Actually, we’re not sure this should be read by children – but their parents will love it. Children should only be given this book by their drunken uncles and wild aunts who don’t want the little darlings to grow up to be insufferable prigs!

More hilarious tales of swash-buckling adventure on the high seas, originally serialized in our blog, The Ship’s Log of the Festering Boil… “The Maracaibo Caper” “The Havana Caper” are now available online at Lulu.com

These big, fat trade paperbacks are $14.95 each, and feature the crew of the Festering Boil – Cap’n Slappy, Ol’ Chumbucket, Cementhands McCormack, Dogwatch Watts, Lieutenant Keeling, George the Greek and the rest – in a pair of swashbuckling adventures.

In “The Maracaibo Caper,” the crew tracks down some old rivals, the infamous “Bawdy Boys,” on a breakneck trip across the Caribbean and into the dark jungles of South America, where a sudden turn of events changes their goal from revenge to simple survival! With old friends in new places and new friends in old ones, there is danger, comedy, anachronisms, and even a little sex, as the Boils face a power they’d never suspected.

Then it’s pirate business as usual in “The Havana Caper,” with the Festering Boil taking aim at the Spanish treasure fleet. But events conspire to make things more difficult – a pirate possessed by a saint, an arrogant officer, an unwelcome family member, even a goat! But when a vicious ghost from their past resurfaces, the Boils have to drop their everything and fight for their very lives

Get news from the Pirate Guys delivered fresh to yer email box:
Subscribe to The Poopdeck, our occasional newsletter.

Check out our CafePress store for the latest in TLAPD Booty!